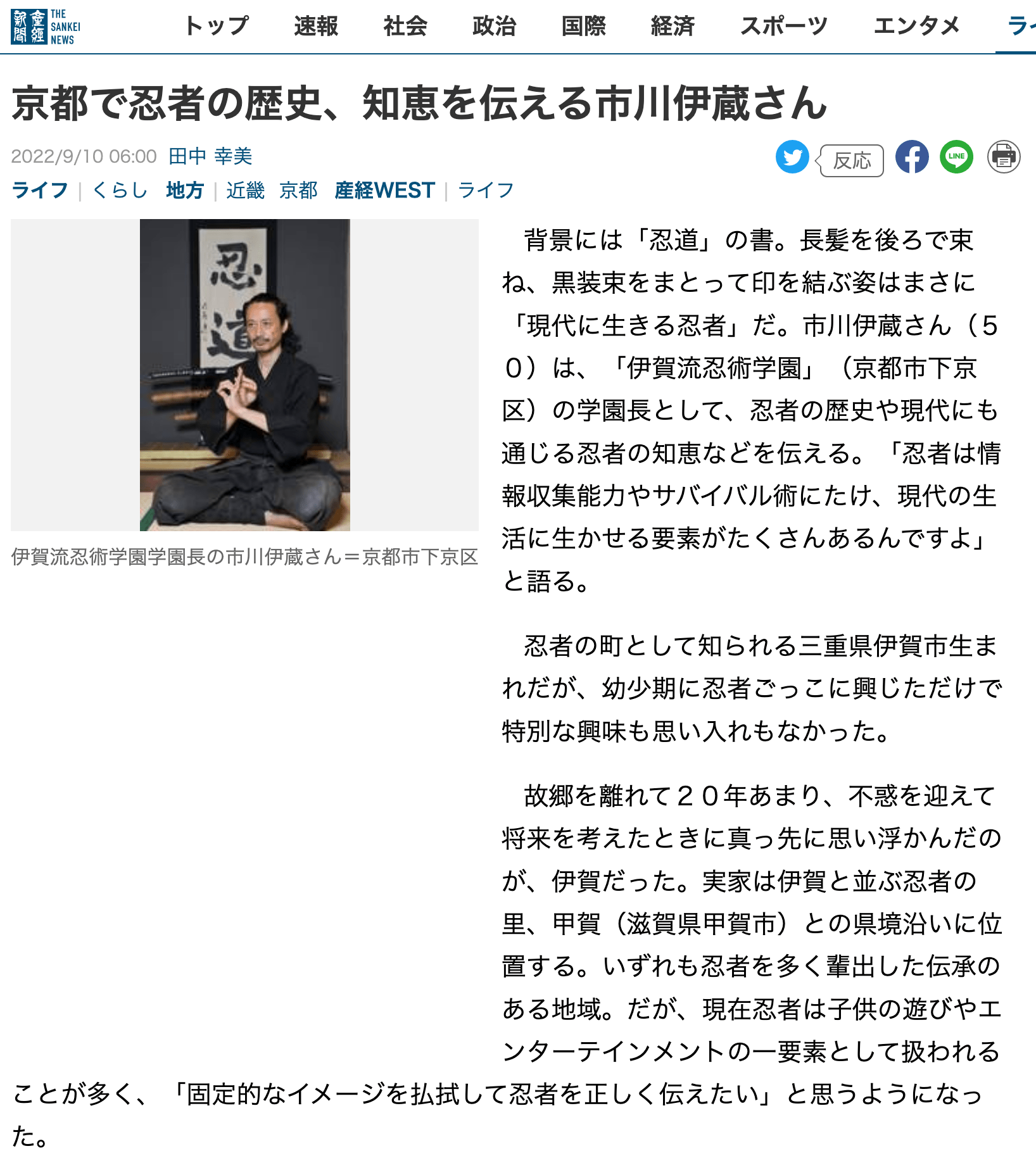 Our grand master Izo Ichikawa’s article is published on THE SANKEI NEWS which is major newspaper company in Japan.

Izo Ichikawa shares ninja history and wisdom in Kyoto.
In the background is a calligraphy of “Nin-do” (the way of the ninja). His long hair is tied back and he wears a black costume and make a finger sign. Izo Ichikawa, 50yo, is the director of the Iga Ninjutsu Academy (Shimogyo-ku, Kyoto), where he teaches the history of the ninja and the wisdom of the ninja that is still relevant today. The ninja were skilled in information gathering and survival techniques, and there are many elements that can be applied to modern life,” he says.
He was born in Iga City, Mie Prefecture, which is known as a ninja town, but he had no special interest in or attachment to ninjas, having only enjoyed playing ninja as a child.
When he thought about his future after more than 20 years away from his hometown, Iga was the first place that came to mind. His family’s home is located along the border between Iga and Koka (Koka City, Shiga Prefecture), which, along with Iga, is the home of ninja. Both of these areas have traditions that have produced many ninja. However, ninja are now often treated as an element of children’s games and entertainment in Japan, which has made them want to “dispel the stereotyped image and properly convey the ninja.
While studying Japanese history and culture and expanding his network of contacts with a business card in hand that introduced himself as a ninja, a turning point came in 2012 when Iga City, Mie University, and others began ninja research as part of a town revitalization effort.
In 2015, he opened the “NINJA DOJO and STORE (Iga-style Ninja Dojo)” for foreign visitors to Japan.
At its peak, the dojo was visited by 100 people a day, mainly visitors to Japan, but the number of visitors declined sharply due to the new coronavirus outbreak. In April of this year, the school opened its doors to Japanese, who can learn ninja techniques such as walking and shuriken-jutsu, as well as ninja history, in a three-month course of 10 sessions.
“The ninja have a strong image of warfare, but their mission is to resolve disputes peacefully by communicating the information they have gathered to their masters. Peaceful arts can be applied to today’s world. I would like to convey the correct image of the ninja” he said, his expression tightening.
Izo Ichikawa
Ichikawa Izo was born in Iga City, Mie Prefecture in 1972. Graduated from Kyoto University of Art and Design with a degree in design. After working for 18 years in corporate advertising design and web design at an advertising company in Kyoto City. He opened the “Iga-style Ninja Dojo” for visitors to Japan in 2015. Taking advantage of the sharp decline in the number of tourists due to the spread of the new coronavirus, he opened the “IGA Ninja School” (https://iganinja.school) for Japanese students in April of this year.